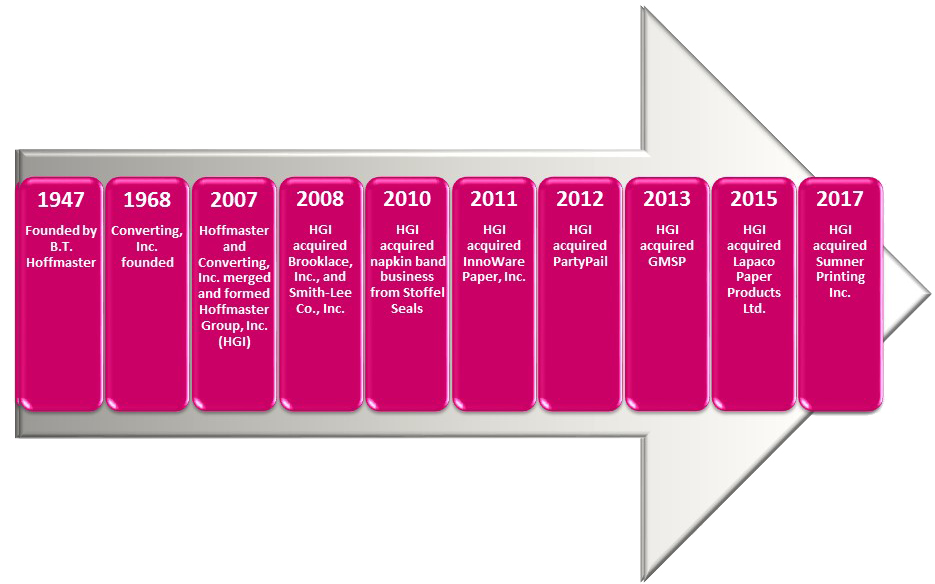 The late B.T. Hoffmaster founded the company of Hoffmaster in February 1947 for the express purpose of manufacturing paper napkin products. The operation consisted of one standard machine used in the manufacture of printed paper napkins and employed four people. During the 1950’s, the company enhanced its reputation and market growth by offering restaurants a complete printed ensemble consisting of placemats, accompanied by matching dinner and cocktail napkins. Another development during this period was the introduction of disposable tablecovers made in decorator colors.

To expedite expansion plans and gain other benefits associated with a larger corporation, the company merged in 1970 with the Amstar Corporation. As a wholly owned subsidiary, the company continued to grow and expansion plans were completed in 1972. In February 1979, the company was acquired by an Oshkosh group of investors headed by T. J. Hoffmaster, son of the founder.

Scott Paper Company in Philadelphia, PA purchased the company in 1985. This merger provided the former Hoffmaster Company with raw material resourcing, capital for expansion, and the resources necessary for new product development. Further growth occurred in late 1989 and early 1990 with a 103,000 square foot expansion to Hoffmaster. This expansion would accommodate assets from Scott Paper Company’s Milwaukee, WI location called American Convenience Products (ACP) which was to be closed. The ACP location produced portion cups, fluted products, and doilies.

In March 1995, The Fonda Group, Inc. purchased the Foodservice Division of Scott. Astro-Valcour, Glens Falls, NY was acquired in April of 1997, expanding the Hoffmaster product line with polystyrene trayliners targeted at the transportation and lodging markets. Springprint, Augusta, GA, a division of Marcal was acquired in September 2000.

In October 2007, Solo Cup sold Hoffmaster to Kohlberg & Company, LLC, a leading U.S. private equity firm with offices in Mt. Kisco, NY and Palo Alto, CA.  At the same time, Kohlberg also purchased Converting, Inc. in Clintonville, WI from Mason Wells and combined the two companies. The new parent company was named Hoffmaster Group, Inc.®, with the Foodservice and Consumer companies operating independently but sharing some common resources. The Foodservice segment operates under the Hoffmaster Foodservice Division name and is based in Oshkosh, WI.  The Consumer segment operates under the Creative Converting Consumer Division name and is based in Clintonville, WI with a marketing office in Indianapolis, IN.

In December 2011, Kohlberg and Company, LLC  reached an agreement to sell Hoffmaster Group, Inc.® to Metalmark Capital, a leading U.S. private equity firm specializing in all stages of development in middle market businesses. They are based in New York, NY.

PartyPail, Inc. an Internet based party goods supplier located in Enumclaw, WA was acquired by Hoffmaster Group, Inc.® in July 2012. They went live with Hoffmaster in November 2012 and currently operate out of Joliet, IL.

Hoffmaster Group, Inc. acquired Lapaco in March 2015. They have 2 plants in Canada are located in St-Hubert, Montreal and Ste-Catherine, Montreal.

In 2017, Sumner Printing, a small custom printer in New Hampshire was acquired by Hoffmaster Group as part of the Foodservice Division. Established in 1990, Sumner Printing has been providing the hospitality industry with quality products for 29 years. Sumner is a manufacturer of napkins, placemats, tray liners and tray mats for the restaurant and healthcare industry. In addition to generic products, they custom-print napkins and placemats to help promote customer brands. No project is too small, or too big- one restaurant right up to multi-unit chains. Sumner Printing starts with quality, taking to heart the needs of the customer first. Sumner Printing has built its reputation on being the very best in the industry.

In 2019 Hoffmaster acquired The Paper Straw Co in the UK.  The Paper Straw Co was founded in April 2018 by 3 partners as a start up business focusing on the manufacturing of Paper Straws in the Manchester area. With the combined knowledge between the partners of the Paper Industry, Machinery Industry and UK Manufacturing, we believe to have a solid platform from which to grow. In April 2020 after being faced with challenges due to the Coronavirus lockdown the factory was redesigned to add production of a disposable Face Visor called The EnviroVisor.

GMSP® was founded in 1994. It was a privately owned small business company until 2013 when Hoffmaster Group Inc.® acquired it.